Sam and Corey are currently travelling around the Nordic countries on a mission to explore Nordic café culture and to eventually publish a book about the project. We wrote about Takk when the project was being funded on Kickstarter. Kalle Freese caught up with the two of them in Helsinki to have a chat about them, Takk and Nordic coffee culture.

Could you tell us a little bit of your background. Where are you from, what do you do?

Sam: My background is a mix of film studies, business school, and working in different cafés, from Seattle to Thingeyri, Iceland. I’ve grown up mostly in Seattle but am originally from Liechtenstein and have a deep connection with Europe, especially the Nordic countries (since living in Denmark and Iceland). I love playing music in a band I’m in with my brother, and before starting this project, I had been preparing to open my own café in Seattle. I hope that this will happen upon returning to the Seattle!

Corey: I have been studying design for the last six years, and just received my Bachelors of Architecture. Photography was initially a tool I used to document the built environment, but then became a way to investigate my surroundings and experiences. It became much more of a hobby than anything else. I bought my first film camera from a thrift store in Greenpoint, Brooklyn four years ago, then a higher quality film camera from a fair in Arizona about a year later, then I used my Father’s old, but very beautiful Nikon FE2, and now I have finally began to shoot digital for this project. I am from the American Southwest, but share Sam’s love and fascination with the Nordic countries, especially after living and studying in Copenhagen.

Why Nordic cafe culture? What’s special about it?

There are so many elements to this big question. First of all, to us, Nordic café culture is special because it is different from the cafe culture we grew up in. This somewhat religious act of gathering around coffee is one that isn’t found in the States (or Seattle specifically) like it is in the Nordic countries. Yes, coffee is highly consumed in a city like Seattle, and there is an array of cafés with incredible coffee, but we wanted to showcase a different culture’s view and interaction with coffee. Our discoveries in Sweden and Finland have been so rich, and the history of each place has become so apparent through the investigation of each café.

What’s the difference between cafe culture and coffee culture?

The first café owner that we interviewed in Sweden, Oskar Alvérus from Drop Coffee, put it so well. He said that any place where people gather together could be considered a café. Therefore, our definition of a café ranges from an outdoor market stall, to a caramel confectionary shop, to a standard espresso bar. Although we both appreciate good coffee, our focus is to find spaces that are extremely unique and provide a great place to gather.

What’s the role of great coffee in Nordic cafes?

Coffee plays different roles in each café, but we have noticed that offering great (or specialty) coffee to customers is a value more reserved to the younger generation. Many of the older customers, or coffee drinkers, are more interested in this act of gathering; or taking a break, than they are in the newest brewing technique, or single origin espresso.

So, in a lot of ways, the trends of great/specialty coffee don’t seem to have been so important in the historical shaping of café culture in the Nordic countries. This seems to be changing, however, maybe due to a higher sense of consciousness, maybe due to the trendiness of specialty coffee, or maybe just due to taste, but it seems less important as a role than it does as a character of café culture in the Nordic countries. 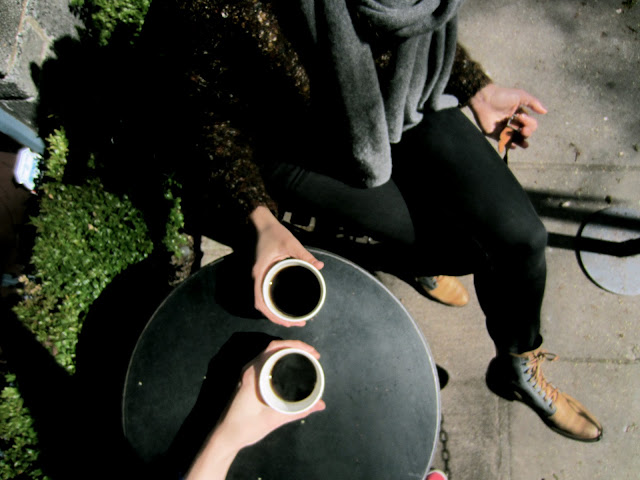 We all know the social aspect is very important in Scandinavian coffee culture. Why do you think that is so?

There probably isn’t one ‘right’ answer to this question, and we have only just begun our project – and are trying to find the answers to this question ourselves. We do know that the social aspect of coffee drinking is big in Scandinavia for many reasons. One reason may be the light and climate – one that lends itself well to staying cozy indoors with a hot cup of coffee to warm your bones and a light flickering on the table. Another reason is its historical significance. There is a rich history of gathering around coffee that has been passed on through generations, even during times of war and hardship. Each Nordic country has its own unique baked goods and pastries, and these are often eaten together with coffee, on certain occasions and during certain times of the year. Each culture has made this simple act unique to their tastes and needs, and have kept these traditions throughout the years. That says a lot about its significance and importance.

How is Nordic black coffee different from others, American for example?

Hmmm, well, this is a touchy subject and we don’t want to offend anyone! It differs so much from person to person, from café to café and depends very much on personal taste.

What do you want to achieve with your book?

Our personal manifesto, in its purest form, is to investigate how people gather in cafes and over coffee in order to inspire others. If we achieve that, we will be happy.

How did you come up with the idea of writing the book?

One of Sam’s friendships in Copenhagen led her to spending the summer in the tiny village of Thingeyri, Iceland, where her Danish friend and classmate built a small café in the West Fjords. Corey worked at the community run café Mellemrummet in Copenhagen and met many of her closest friends while working there. Our communities were formed in cafés and were a big part of shaping our experiences abroad. Also, our various backgrounds and interests make for a unique partnership in this project. We are just so excited by having the possibility to do this and fulfill this dream.

Where have you been so far? Where are you up to next?

We started in Sweden, where we spent time in Stockholm, Gothenburg and Dalarna. We then traveled to Finland, starting in Turku and making our way to Helsinki. It’s been an incredible journey so far, full of surprises, new friendships and many, many cups of coffee.

How long will you be travelling? When are you planning to publish the book?

We are traveling for three months in total; as much as our travel visa allows, and hope to have the book out at the beginning of the New Year.

What are you planning to do in the future, after publishing the book?

Sam will open her dream café in Seattle and Corey’s future will most likely lead her towards the architecture/design field. Her dream is to work at an architecture firm in Copenhagen.

What new have you learnt about Scandinavia, its people, coffee and cafe culture?

We learn something new about Nordic coffee, its café culture, and the Nordic people everyday. This is such a hard question to answer because we’ve met so many amazing people, all with their own stories and opinions about coffee and café culture. What has shocked us a bit is the fact that many Scandinavians don’t recognize that such a rich café culture exists in their own country, or they haven’t properly reflected upon it… until we meet them and get them to talk! Then, once they begin to discuss their experiences with coffee, their eyes begin to open a bit wider, and they realize that café culture is a very special part of their lives. Knocking people into a sense of realization has been the best part.

If you’d like to learn more about the project and read about what Sam and Corey are up to, check out their blog or their twitter, @NordCafeCulture!